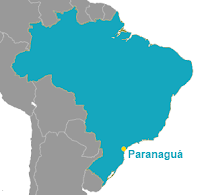 A Federal Police (PF) operation Monday at the port of Paranaguá found “silicone fingers” that were used by employees to forge their attendance and receive credit for days not worked.

The 25 “fingers” were tailor-made, reproducing the fingers of 14 employees. They were stored in desks at the port, labeled with the name of each worker. Even a tray (ed. mold?) was found.

Each of the workers have worked there for at least eight years, according to PF.

Federal Police are investigating whether there are other people involved in the fraud.*

According to their site, the port at Paranaguá is the largest bulk port in latin America.

See Brazilian ghost doctors have rubber fingers for a more in-depth analysis of why forcing time-and-attendance fraud into the realm of rubber fingers is actually a good thing.

Long story short, every person who participated in creating a facsimile of their fingerprint has also had to create a lot of evidence that they participated in a conspiracy to defraud their employer.

The fraud kit in this most recent case can be seen at the Folha link.

*Translation from Google & Bing translation services with an assist by me. For now, robots still have a hard time with Brazilian Portuguese. I sympathize.

As the comment period for identification card readers for US ports draws to a close Thursday, officials at the Department of Homeland Security (DHS) remain confident that the overall personal identity verification program for port workers is on track.