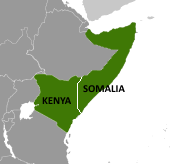 Somalia’s remittance crisis has been intensifying for years. Britain’s Barclays Bank closed its accounts with Dahabshiil, the largest Somali money transfer company, in 2014.

In Australia, Westpac, the only bank partnering with Somali remittance companies, is due to close their accounts at the end of March, the report said.

Britain has been working with the World Bank on a “Safer Corridor” initiative to tighten the scrutiny of Somali money transfers through measures such as biometric identity cards for recipients in Somalia.

The “last mile” problem is usually reserved for describing the challenges of connecting retail customers with physical infrastructures such as plumbing, electricity or wired communications.