The highest priority of any law enforcement agency is to protect the communities it serves. When it comes to enforcing our nation’s immigration laws, U.S. Immigration and Customs Enforcement (ICE) focuses its limited resources on those who have been arrested for breaking criminal laws.

ICE prioritizes the removal of criminal aliens, those who pose a threat to public safety, and repeat immigration violators. Secure Communities is a simple and common sense way to carry out ICE’s priorities. It uses an already-existing federal information-sharing partnership between ICE and the Federal Bureau of Investigation (FBI) that helps to identify criminal aliens without imposing new or additional requirements on state and local law enforcement. 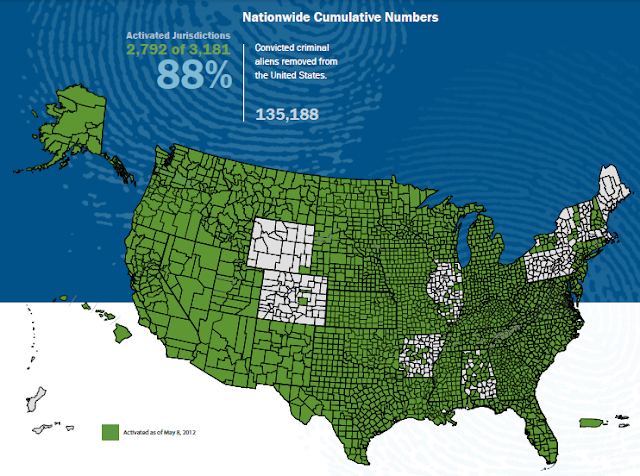 The U.S. Immigration and Customs Enforcement released a full update of every county participating in the Secure Communities initiative and when they came onboard. Click here for the full PDF.

In other news, it appears that by the time the next report comes out, Massachusetts may be colored green…

Bristol County Sheriff Thomas Hodgson welcomed the news that the program, designed to determine suspects’ immigration status, will go into effect statewide May 15. “It’s a big victory for the law enforcement community,” said Hodgson, who had fought to bring the program to the state. “It’s a big victory for the citizens of Massachusetts.” When a suspect is brought to a Bristol County jail, his or her biometric fingerprint information will be shared not only with the Federal Bureau of Investigation — as is currently the case — but also with immigration officials, he said.